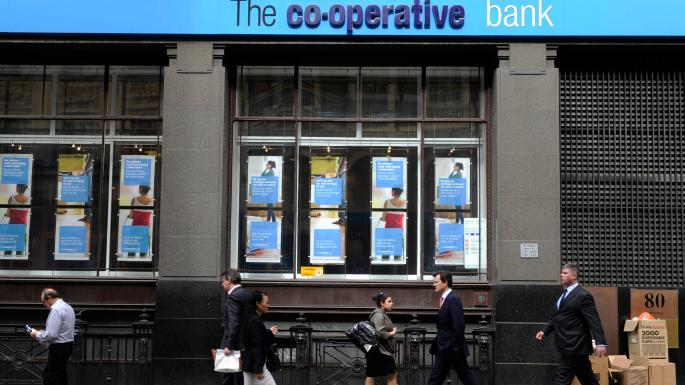 The Co-operative Bank could lose its name if its parent group’s stake falls so low that consumers are being misled.

The potential intervention by the Financial Conduct Authority was laid out in the 2013 prospectus for the bank’s restructuring but was little noticed at the time. However, it could come back to haunt the loss-making society now as it faces the possibility of another debt for equity swap to bolster capital.

There is a view in the City that in the next few months the Co-op bank will embark on another dramatic restructuring, including converting bondholders into equity.

There is also an expectation that the Prudential Regulation Authority, which is responsible for the stability of banks, will push investors to inject more capital into the Co-op to replenish the hundreds of millions it has lost in the past couple of years in fines, repairing its IT system and other restructuring.

If the restructuring goes ahead, the Co-op group will face a big question about whether to put fresh capital into the bank. The Co-op group’s holding fell to 30 per cent four years ago, when several hedge funds took part in the bank’s first capital raising to fill a £1.5 billion hole, and then to 20 per cent in 2014 when the group failed to put up more money in a fresh £400 million capital raising because of its own financial pressures.

The group, whose business ranges from convenience stores to funeral care, has been on a recovery path but may still feel it is too constrained to invest. Speculation about its plans increased last week when Richard Pennycook, the chief executive who oversaw its improvements, quit suddenly but with a mandate to manage the relationship with the bank.

If the group does not take part in a new fundraising for the bank, its stake would fall further, raising questions about whether the bank could still be called the Co-op.

The matter would have to be decided by either Greg Clark, the business secretary, or Andrew Bailey, chief executive of the FCA.

The 2013 prospectus said: “The secretary of state for Business, Innovation and Skills may direct the Bank to change its registered name if, in his opinion, it gives so misleading an indication of the nature of its activities as to be likely to cause harm to the public.

The FCA has the power to prevent the use of the ‘Co-operative’ name, or to take other action regarding the Bank’s branding, if the FCA considers this desirable to protect consumers, to promote competition in the interests of consumers or to protect the integrity of the UK financial system.”

The bank would be likely to fight any such move on the grounds that it could trigger an outflow of depositors who had remained loyal despite its travails but might decide to change banks if they no longer thought it was linked to the ethically minded Co-operative society.

It is making some progress, including upgrading its IT system, but other problems remain, including worries about its pension scheme.